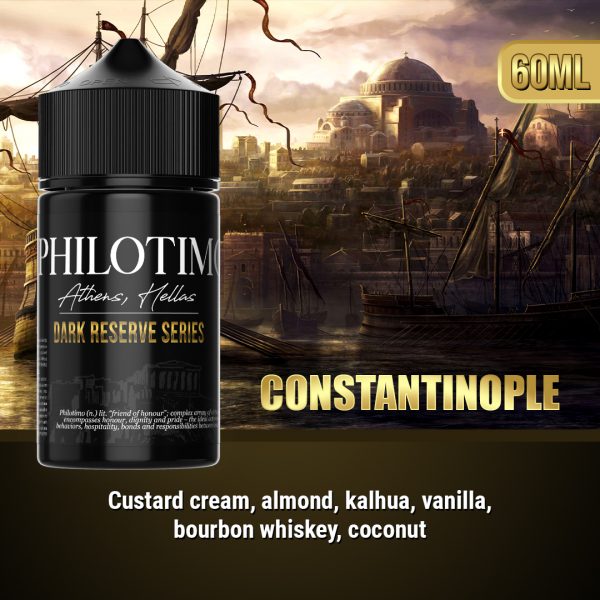 Natural Aroma, soluble in vegetable glycerin, diluted with propylene glycol in a ratio of VG/PG 50/50

No city in human history has been able to combine grandeur with mystery to the same degree as Constantinople has. For over 15 centuries it served as the capital of two vast empires, but also the greatest symbol of hope for one of the oldest nations in the world. The beacon that illuminated the modern world, as in its dusty alleys and majestic temples, Hellenism engaged Christianity to birth the Western Civilization. Philotimo, with respect and love for what this city stands for in the souls of Greek people, created the CONSTANTINOPLE recipe. The gentle sensation of custard cream is combined with the mysterious tones of vanilla and coconut, to get you, through the refreshing sweetness of coffee liqueur, in the imperial world of almond-flavored bourbon whiskey. Tastes that awe you the same way as the mystical magnificence of Constantinople does.

To be able to vape this liquid it is necessary to mix it properly with a base. Here you will find our VG/PG Bases and Nicotine Boosters.

There are no reviews yet.

Only logged in customers who have purchased this product may leave a review.